Same procedure as every year...

At the moment we are leaving the harbour of Scheveningen, which marks for us the starting point of the ICES coordinated international acoustic blue whiting survey 2014

Our plan is to steam towards Galway (Ireland) for the weekend from where onwards we will start the data collection. If time and the weather conditions allow it, we will calibrate our acoustic equipment, prior to our stop in Galway, in the Bantry Bay on Thursday or Friday. 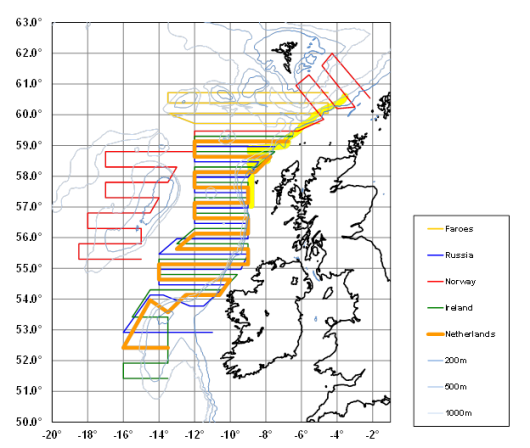 On Monday we are scheduled to leave the harbour of Galway and head towards the beginning of our survey track. Our planned survey track is marked in orange colour on the map below, representing the EU part of the internationnally coordinated blue whiting survey. Countries participating, with their own vessel, besides the Dutch are Ireland,Norway, Russia and the Faroe Islands.

From IMARES Tridens is joined this year by Sven Gastauer, Kees Bakker and Thomas Pasterkamp.

The survey
The Dutch part of the survey represents the EU contribution to the internationally coordinated effort to estimate the size of the blue whiting stock west of the British Isles. The area will be surveyed on a systematic, predefined cruise track. 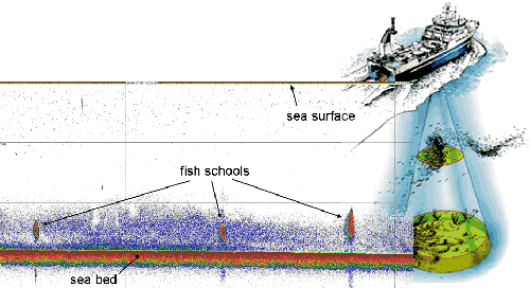 During the survey we continuously send out vertical sound waves through the water and collect acoustic backscatter data. We can visualise these data in a so-called ‘echogram’ – essentially a 2-dimensional slice through the water column. Once we have completed the survey of the area, we combine all the echo energy that was reflected by blue whiting and convert it into fish numbers and weight.


Additionally to the acoustic data we will be collecting biological samples (go fishing...) based on observed acoustic marks. This will help us to determine the length, weight, age and maturity of blue whiting, an important input into our biomass, health of the stock and recruitment estimates. Further we will be collecting hydrographic data (temperature and salinity profiles) on predefined stations, which will allow us not only to monitor changes in the water column over time but allows gives us the opportunity to explore the influence of these environmental conditions on the distribution and abundance of blue whiting.

Additional side projects during this year's survey are to collect stomach and gonad samples of blue whiting, in order to make some estimations about the feeding behaviour of blue whiting during their spawning season. Afurther subgoal of the project is to do some basic research on the distribution of mesopelagic (deep sea) fish in the area. If time allows for it we will be doing some dedicated trawls at the end of the survey, otherwise we will only be able to look at the species we get during the blue whiting trawls and monitor their diurnal migration on the acoustics.