Unfortunately I was unable to upload yesterday’s blog, so here it is today:
Yesterday (Monday 23rd March) we departed sunny Galway harbour and headed towards the first destination on our newly appointed cruise track. ‘New’ because of a last minute swap with the Russian vessel, ‘Fridtjof Nansen’ due to some issues over their entry into British waters. The seas have been rougher than expected during Monday evening/night which meant we arrived at the first transect several hours later than expected.

Despite being well prepared and having done a good calibration of (most) transducers during the test weeks prior to the survey, bad weather has meant large(ish) waves have been continually crashing onto the bow of the Tridens, which resonate sound through the hull. This sound is easily picked up by the echosounders. When you stand in the drop keel room you can hear large crashes and bangs - these are seen as hard spikes on the echograms. We tried a few tricks to hopefully reduce the interference; including a range of speeds and depths to which the drop keel was lowered, unfortunately these made little difference. Lowering the bow of the ship did however reduce the interference slightly. 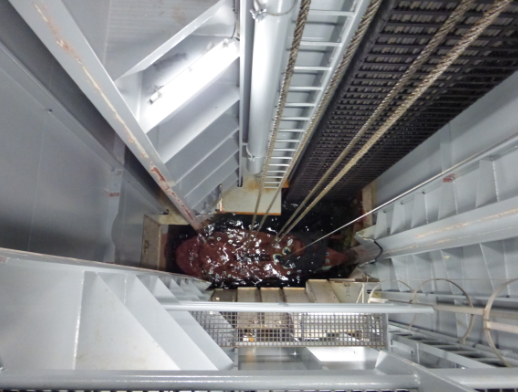 All newly installed equipment is prone to teething problems and aboard the Tridens there is no exception. The main resolve will be to hope for better weather before we come across the main aggregations of fish further along the cruise track (fingers crossed!).