The Good, the Bad and the Scaly...

Since the last post, we’ve been busy.  We’ve taken in seven more hauls of fish and completed our north-south transect.  We’re now further North just past Donegal, joining the other ships on the survey. 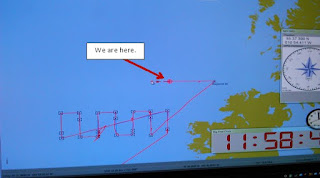 Friday morning did indeed turn out to be stormy, but the presence of a large school of fish below the waves meant we needed to ride it out.  We finally succeeded in fishing that evening, which took us most of the night and following morning to sort.  A second trawl followed on Saturday afternoon, and a third that evening.

Sunday we woke to the smell of fish.  The Easter Bunny had brought us a large school of blue whiting as you can see in the echogram: 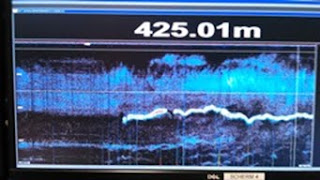 We took in a second trawl just after lunch.
Since starting our new transect, we’ve trawled twice more, bringing us up to a total of ten.

The majority of our catch has been blue whiting. 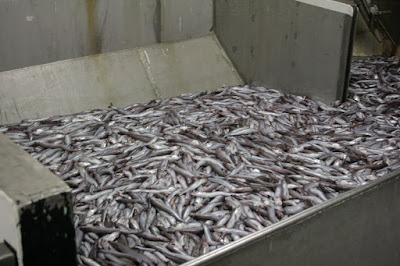 When we take in a new haul of fish, we first sort the fish by species.  All the fish are counted, measured and weighed, but the most attention is given to the blue whiting.   Where we catch a lot of fish, we weigh everything, but take a sub-sample to measure.  For the whiting we also determine what stage of reproduction they are at, whether they’re juvenile, maturing, spawning or spent (released their eggs and sperm already).  Then we collect otoliths, bony structures in the inner ear of bony fishes that are involved in hearing, balance and orientation.  From a scientific standpoint these are used to determine the age of a fish.  As the fish ages, layers are added to the otoliths, similar to the rings in a tree.  It is important to know the age of the fish because when we combine the age and size of the individuals we caught with what we see on the echogram, we can estimate a population profile; how many juveniles there are, how many adults and most importantly, how many more juvenile fish will likely join the population next year.  This is essential to tell us how many fish can be caught without damaging the stock.  We also collect a tissue sample and store it for later genetic analysis by colleagues who determine the relationship between whiting caught in different seas, whether they interbreed, or if they are genetically isolated.  This is important for stock management, but more about that another day. 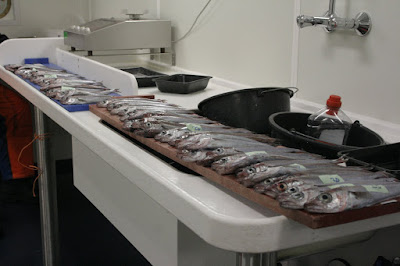 Anything that is not the target species (i.e. blue whiting) is called bycatch, and we’ve found some exciting things.  This angler fish hasn’t been found on this survey before. 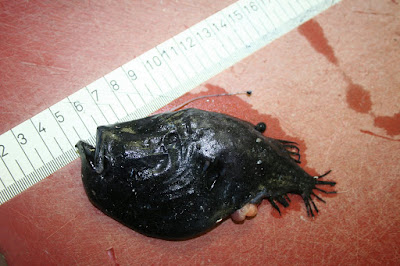 This was a live barbeled dragonfish (Melanostomias bartonbeani), which flipped around and gave us the stink-eye when we tried to sort it. 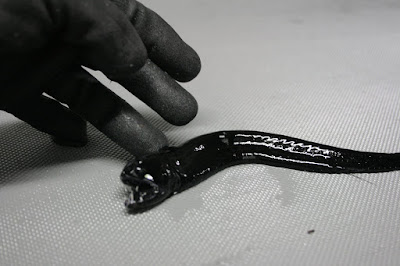 A welcome addition to our catch were these snipe eels, Nemichthys scolopaceus, with their long whippy tails and sharp pointed snout, they’re very distinctive.  The tail also possesses considerable grip when wrapped around an object as we found. 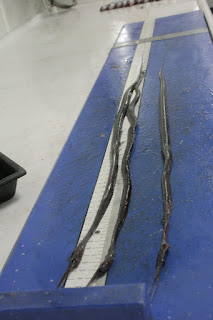 We also caught half of whatever this was.  Personally I’m hoping for giant squid, but the characteristics don’t quite match.  It was probably the remains of an octopus.  Whatever it was, it was huge.  Yes, that’s its eye. 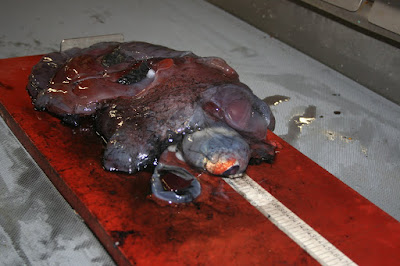 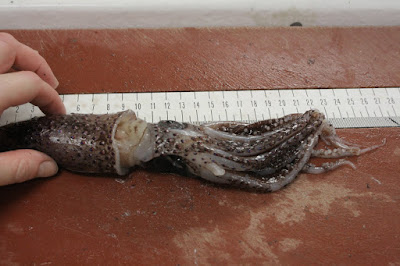 And to go with all the jellyfish we’ve found, a Cornish blackfish, Schedophilus medusophagus (it eats jellyfish). 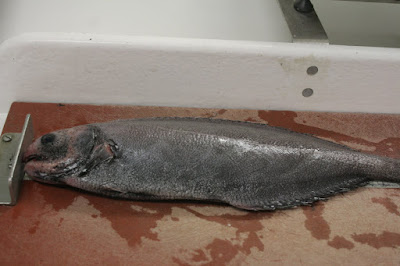 After blue whiting, the most numerous fish we’ve found are fishes of the family Myctophidae, which are small, torpedo shaped fishes with luminous spots – photophores.  They tend to be badly damaged by the trawl net, and all look quite similar.  Last we posted we had one species, now we’re up to about eight. 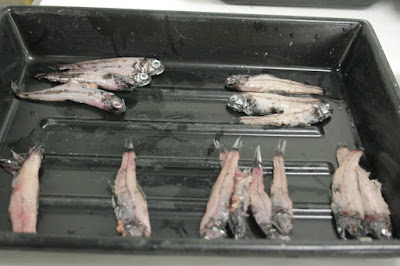 Two hatchet fish (Argyropelecus spec.), one of which is typically less than 5 cm... 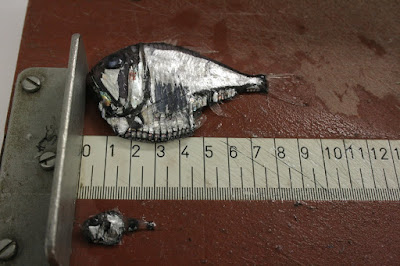 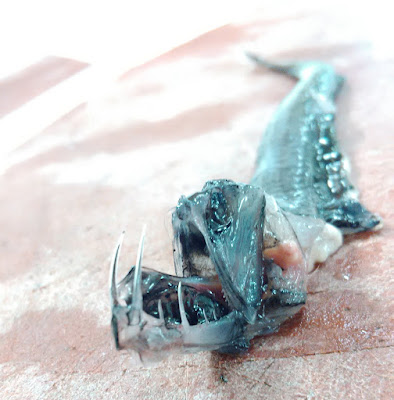 These are attractively known as stareaters (Astronesthes spec.).  These possess a light-producing barbel which they bob around in front of their mouths, attracting prey into striking distance.  We have two species at present, those with red and black tipped barbels, and those with pink ones.  Certainly wouldn’t want to meet these down any dark alleys. 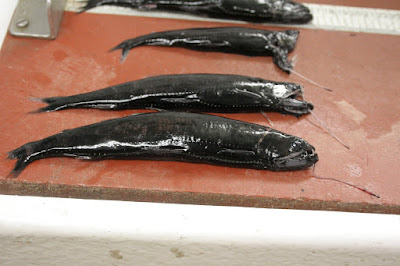 We’re hoping to fish some more in the next few days, stay tuned. 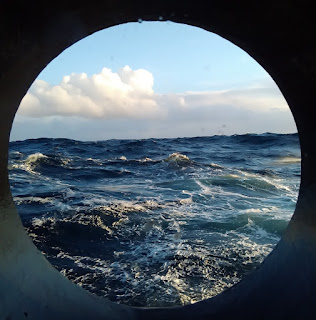