The predictions of yesterday became obviously true and we faced wind force 8 for the entire day. Looking at the weather reports, it seems like we are going to be stuck with this kind of weather for the next few days at least...

These harsh weather conditions let our Russian and Irish colleagues struggle a bit, with the Russians facing even more severe conditions further out west, hit badly by the low pressure and the Irish not able to fish in these conditions.

Nonetheless we saw some nice blue whiting schools today...And we fished on it!...Twice..

Trawl No 4:Trawl No 4 was a pure blue whiting catch, executed last night with some mesopelagics..

Trawl No 5
Trawl No 5 was again a pure blue whiting catch with very few mesopelagics, a few squids and a dealfish. 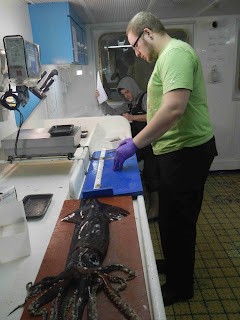 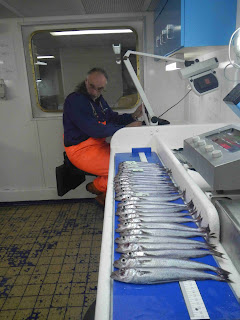 Left: Dirk having a serious look at the blue whiting               Right: Jeroen and James going through the mesopelagics and squids 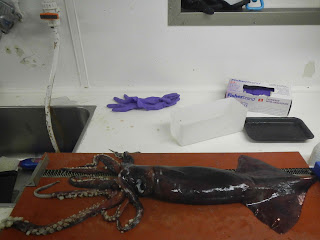 Squid caught during trawl No 5